THREE MEN IN A BOAT (to say nothing of the dog)
by JEROME K. JEROME

There were four of us: George, and William Samuel Harris, and myself, and Montmorency. We were sitting in my room, smoking, and talking about how bad we were — bad from a medical point of view I mean, of course.

It is a most extraordinary thing, but I never read a medicine advertisement without being convinced that I am suffering from the particular disease, in its most virulent form. The diagnosis seems in every case to correspond exactly with all the sensations that I have ever felt.

I remember going to the British Museum one day to read the treatment for some illness - hay fever - I think it was. I took the book, and read all about my sickness; and then, in an unthinking moment, I turned the pages, and began to study diseases, generally. I forget which was the first disease I read about — some fearful, devastating disease, I know — and, before I had read half down the list of symptoms, I realized that I had fairly got it.

I sat for awhile, frozen with horror; and then, I again turned over the pages. I came to typhoid fever — read the symptoms — discovered that I had typhoid fever, must have had it for months without knowing it — wondered what else I had got; turned up St. Vitus’s Dance — found, as I expected, that I had that too, — began to get interested in my case, and so started alphabetically — read ague, and learnt that I was sickening for it, and that the acute stage would start in about another two weeks. Bright’s disease, I was relieved to find, I had only in a modified form, and, so far as that was concerned, I might live for years. Cholera I had, with severe complications; and diphtheria I seemed to have been born with. I read conscientiously through the twenty-six letters, and the only malady I could conclude I had not got was housemaid’s knee.

I felt rather hurt about this at first; it seemed somehow to be a sort of an insult. Why hadn’t I got housemaid’s knee? Why this invidious reservation? After a while, however, I reflected that I had every other known malady in the pharmacology, and I grew less selfish, and determined to do without housemaid’s knee. Gout, in its most malignant stage, it would appear, had seized me without my being aware of it; and zymosis I had evidently been suffering with since I was a boy. There were no more diseases after zymosis, so I concluded there was nothing else the matter with me. 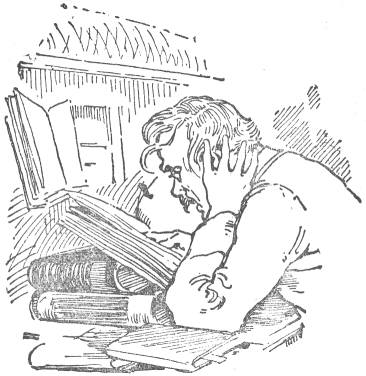 I sat and pondered. I thought what an interesting case I must be from a medical point of view, what an acquisition I should be to a class! Students would have no need to "walk the hospitals," if they had me. I was a hospital in myself. All they need do would be to walk round me, and, after that, take their diploma.

Then I wondered how long I had to live. I tried to examine myself. I felt my pulse. I could not at first feel any pulse at all. Then, all of a sudden, it seemed to start off. I pulled out my watch and timed it. I made it a hundred and forty-seven to the minute. I tried to feel my heart. I could not feel my heart. It had stopped beating. I have since come to the conclusion that it must have been there all the time, and must have been beating, but I cannot explain it. I patted myself all over my front, from what I call my waist up to my head, and I went a bit round each side, and a little way up the back. But I could not feel or hear anything. I tried to look at my tongue. I stuck it out as far as ever it would go, and I shut one eye, and tried to examine it with the other. I could only see the tip, and the only thing that I could get from that was to feel more certain than before that I had scarlet fever.

I had walked into that reading-room a happy, healthy man. I came out a decrepit wreck.

I went to my doctor. He is an old friend of mine, and feels my pulse, and looks at my tongue, and talks about the weather, all for nothing, when I think I’m ill. "What a doctor wants," I said, "is practice. He shall have me. He will get more practice out of me than out of seventeen hundred of your ordinary patients, with only one or two diseases each." So I saw him, and he said:

"Well, what’s the matter with you?"

“I will not take up your time, dear boy, with telling you what is the matter with me. Life is short, and you might pass away before I had finished. But I will tell you what is not the matter with me. I don't have housemaid’s knee. Why I don't have housemaid’s knee, I cannot tell you; but the fact remains that I have not got it.  Everything else, however, I have."

And I told him how I came to discover it all.

Then he opened me and looked down me, and took my wrist, and then he hit me over the chest when I wasn’t expecting it — a cowardly thing to do - I would say. After that, he sat down and wrote out a prescription, gave it me, and I put it in my pocket and went out.

I did not open it. I took it to the nearest pharmacy, and handed it in. The man read it, and then handed it back.

He said he didn’t have it.

"Are you a pharmacist?"

"I am a pharmacist.  If I was a store and hotel combined, I might be able to help you. Being only a pharmacist I cannot."

I read the prescription. It said:

I followed the directions, with the happy result — speaking for myself — that my life was preserved, and is still going on.